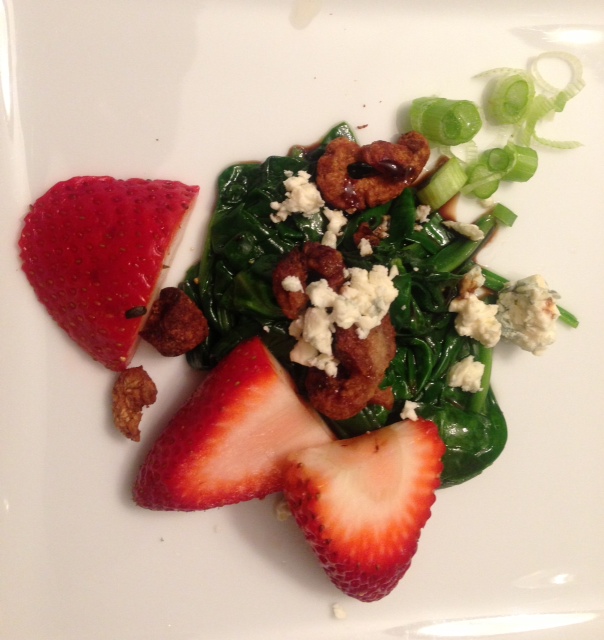 I like duck.  As a child I didn’t: too gamey.  But then I had grilled duck breast in France.  Been a fan ever since…

The other day I wanted to do a little seared duck breast, but because I was making a port wine sauce, I just didn’t want the fat and skin on it.

So I cut the fat off, of course.  But now I was going to be wasting all that good taste.  So I sliced the skin into little strips and fried them until they were good and crispy.  I also ended up with a pan full of rendered duck fat.

Now you may not know this, but people sell tubs of duck fat.  Why?  Because Duck Fat.

I had a little plan for my pan full ‘o fat, and it ended in one of the best wilted spinach salads I’ve ever had.

What You Need (4 servings)

Slice the skin & fat into strips about 1/4 inch wide.  Heat a skillet over medium heat.  Place the strips in and cook, turning occasionally, until crispy.  Drain & reserve fat.

Heat a separate skillet (or clean that one), and heat over medium heat.  Add about half the reserved fat, and add spinach.  Turn often.  You want it just wilted, not cooked to oblivion. Think “al dente.”

Remove from heat when it’s done (put it in a bowl) so it stops cooking.  Portion out the spinach, layer the strawberries around the edge, sprinkle a little balsamic vinegar on top of the spinach, crumble half an ounce of blue cheese and put 1/4 of the cracklins on top.   Garnish with scallions.