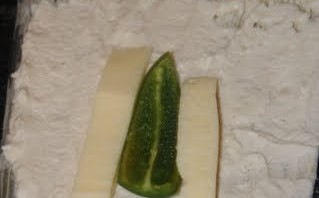 If you’re from Texas, you know that tamales are considered one of the important food groups, right behind Bar-B-Que. For those of you that aren’t from Texas, tamales are traditional south-american fare, often made with beans or pork. They are wrapped in corn husks and steamed. Unlike former President Ford, it is not recommended that you eat the husk.

The holidays, especially, find all the Gringos out searching for their dozen or so Christmas tamales from the most authentic tamaleria (tamale store) they can find. Or if they’re lucky, from the person you know that makes them at home. Home-made tamales are made during a tamalada, or tamale-making party.

Although I myself am a Gringo, I also live in Texas, so tamales are muy importante to my diet. This year, I decided to make my own tamales. So far, I’ve made three batches. I don’t see how people can make money selling a dozen tamales for $10, but they are a lot of fun, and you get a certain satisfaction from rolling your own.
Tamales
What You Need
Something in which to steam the tamales (e.g., something that lets you put water on the bottom and the tamales on some surface above the water). A tamale pot (a tamalera) can hold hundreds of tamales, while a lobster pot can hold about 45 tamales.
Corn husks
4 cups masa harina (it is different from corn meal, so make certain your masa has been treated with lime)
5 cups lukewarm water
1 cup manteca (that’s lard)
2 tsp baking powder
1 tsp salt
Filling
Queso Quesedilla
Jalapenos or minced chipotles

Start your fillings. If you’re doing the chicken, add a couple of chicken breasts to the Ro-Tel and cumin, add enough water to cover the chicken, boil, then simmer rapidly until about 95% of the liquid has evaporated and the chicken shreds with a fork.

For the rice, make some white rice (about 2 servings). Add a few sprinkles of cinnamon, 1/3 cup of raisins and 2 tsp sugar.

For the pepper/cheese filling, slice the jalapenos into quarter strips and de-seed. Cut the cheese into 1/4″ strips, each about as long as your jalapeno slices. Mince some chipotles (about 1/4 cup).
Mix your dry ingredients. Add the water and, using your hands, knead until all the dry ingredients are wet. Separately, whip the lard until fluffy.

Combine the masa, salt and baking powder, then add the water and lard. Mix (using a dough hook, if you have it) until slightly spongy.

Start your water on medium-high heat. If you’re not using a tamale pot, make certain that your pot has an insert that will allow you to place the tamales above the water.

Take a couple of husks and pull apart until you have several corn threads (about 40 for starters). These should be long and thin to use as ties later.

Get some kitchen shears and cut the other husks to about 7-8″ long (cut the pointy ends).

Start spreading masa. Ideally, your husks should be about 4-5″ wide, and you should use 2-3 tbsp masa. Feel free to use a knife to trim the husks to the correct width. You want to go from side to side with the masa, and leave about one inch on each end. Place your ingredients toward one edge and roll. Tie the ends with your husk threads.

Once you have about 12 (or double the amount that will fit on one layer) tamales done, place 1/2 in your pot, leaving space between them, and begin steaming. After five minutes, add another layer, let steam 5 minutes, add another layer, etc. Once your final layer has been added, steam for 45 minutes (depending on thickness: my tamales are about as big round as a quarter).

Pull them out, let them rest for 15 minutes to firm up, and serve!