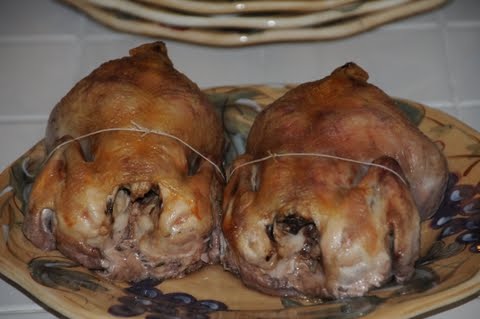 Sometimes, we get a wild hare up our you-know-whats and feel a sudden, inexplicable need to cook an involved dinner. This happened to us Friday on the way home from work, so we called some friends and invited them to dinner Saturday.
The thing that was burning a hole in our ovens was a package of cornish game hens we had bought stupid cheap a few weeks earlier. Interesting thing about cornish game hens: they’re not game birds, and they’re not necessarily hens, either. It’s a breed of chicken, developed in Connecticut in the 1950s, that is ready for processing in 2/3 the time of a normal chicken. It is similar to a poussin, except that it must be from a “cornish chicken or the progeny of a cornish chicken,” or at least so says the USDA.

So, in chicken terms, it’s a teenager from back east. As good a reason as any to kill it and eat it, I suppose.

Before you begin, a couple of safety tips: First, taking the birds out of the freezer and leaving them on the counter for 9 hours may not be sufficient time for them to thaw. If they’re not thawed, run warm water over and through them until the meat is room temperature. Secondly, soup is hot, and I do not recommend coating your hand in it.
Roasted Cornish Game Hens
What You Need 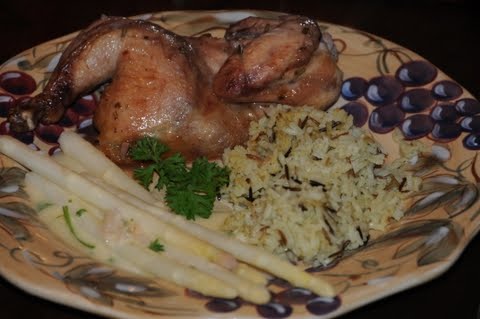 Preheat your oven to 475 degrees.

Kosher the birds. Well, not a full-on kosher, but rub some kosher salt on the skins and set them aside. This will remove some of the moisture from the skins and help them brown up.

Combine the other ingredients in a roasting pan. You want enough wine to just barely cover the bottom (1/8″ or so). Squeeze in the lemon slices. Add a bit of salt and pepper. Taste, and adjust seasoning.

Wipe off the salt from the birds using first a paper towel, and then your hands. This probably goes without saying, but since the object is to dry out the skins, don’t use water in this process. Rub each bird with olive oil (about 2 tsp each).

Truss the birds: tie the legs together in the back, and tie a string around the bodies to keep the wings in tight. Place the birds in your roasting pan. I did mine breast side down because I didn’t want to baste them to keep the meat moist. Cooking them breast up will give you crispy skin over the breast, but you’ll need to baste the birds about every 15 minutes.

Cook at 475 for 15 minutes, then lower temperature to 325 for about 45 minutes. Cook until they’re 180 degrees on the inside. If they don’t get quite brown enough, you can bump up your temperature at the end for a couple of minutes, and then pass the hens under a broiler for about 2 minutes.

Remove the hens and let them rest for 10 minutes. Empty the remaining liquid into a flat-bottomed pan and reduce to about 1/3 volume for a sauce. Cut each bird in half (just press down with a chef’s knife in the middle of the back), plate and serve.

We drank the wine we cooked with, and served with white asparagus with a beurre blanc sauce, wild rice, and a very thick and hot potato leek soup.