All she ever wants when she comes to our house to eat is Caribbean Shrimp. Or lobster (once she got so desperate for it she actually brought her own).

But  does she ever get it? Nope.

We just tease her: a bit of shrimp here, a taste of mango there…

Throw in our generally healthy eating of late (lower carbs at night, for instance), and disappointment for Jane is almost guaranteed.

Not that she eats poorly mind you.  In fact, don’t pity my sister.  Envy her instead. 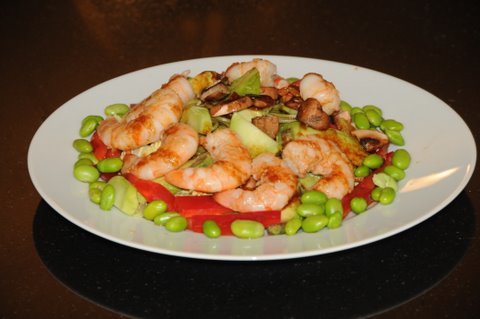 First, toast your sesame seeds. Put them in a skillet over medium heat, and keep them moving until they start to turn brown, then remove.

Peel the shrimp completely, then put in a bowl. Add the serranos, sesame seeds, lime juice and a couple pinches of salt. Toss until the shrimp are well-coated.

Put water on to boil.

Once the water starts boiling, throw in your soba noodles and put the shrimp in the skillet (with a bit of olive oil) and sautee.  Each should cook about 4 minutes.

To plate, put a bit of napa cabbage down as a bed, the put your noodles on top of that. Arrange the rest as you see fit.

Finally, create a dressing by mixing the sriracha, soy sauce and oil in a 2:2:1 mixture (the exact amount will be determined by how much dressing you want, but go for about 1 tbsp per person).