I believe that we lack rites of passage. I’m not talking about the “put your hand in a woven glove filled with stinging ants variety.” I’m talking about those things that propel us from one stage of life to another.

It used to be that we had some significant milestones.  Your first car? It was freedom. It was establishing boundaries. It was responsibility.  Now? It’s either a riced-out racing machine that only teaches responsibility when wrapped around a street lamp, or it’s got so many parental-imposed limits (“don’t drive on the freeways” “don’t drive after dark”) that the boundaries are pre-made, and freedom is squelched.

Instead of true rites of passages, we substitute events such as kindergarten “graduation” (give me a freaking break), or children create their own (hazing, anyone?). Either way, these are not rites of passage. They teach nothing. They do not serve as watershed moments.

Recently, we had our nephews up to my family’s place in Colorado. Pretty much located in the midst of the Pike National Forest, it’s where I did a lot of my growing up.  My dad brought out a BB gun for them to shoot with one caveat: nothing moving except a rabbit that liked my mother’s petunias.

For several days, it looked as if the rabbit would win (favorite quote from the great rabbit hunt: BUNNY! … chck-chck). 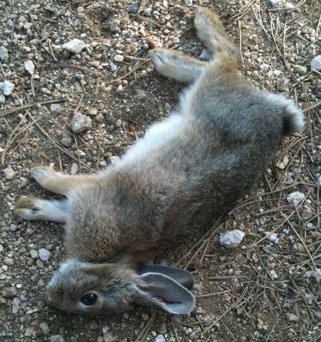 Then, finally, Cole shot it.

And with the clarity of a diamond bullet to the forehead he confronted a range of dilemmas and moral choices. What’s the difference between enjoying the hunt, and enjoying killing? If I’m not OK with shooting a rabbit and cooking it up, can I be OK with the hamburger I ate yesterday?  Perhaps most importantly: Now that I’ve done the deed, am I going to cowboy up, own what I’ve done, and finish the job?

After a few minutes on the front stoop processing through things, and coming out on the right side of the questions, in my opinion, we got down to the business of skinning the rabbit, then butchering it (part of the lesson, donchaknow?).  The next day, we made hunter’s stew for lunch which, although a bit lean on the meat (one rabbit for 6 provides about two to three bites each), was pretty damn tasty.

But most importantly, it was a rite of passage for Cole that few his age experience.

Rabbit. Ideally, one for every two people.
Broth (made from the rabbit carcass if you have it, from chicken if you don’t).
Carrots, about one per person (oh, the irony)
Potatoes (depending on how much starch you like in your stew, around 1 for every 2 people)
Onion, about 1/4 cup sliced per person
Celery leaves (fresh)
A few sprigs parsley
Oregano
Salt
Pepper

Butcher your bunny. Here’s a link if you have no idea (except I cut the loin off, as you would  from a deer). You’re going to want a boning knife

Put each carcass (ribs, backbone) and belly meat in about 2 cups of water per rabbit with pepper, salt, the celery leaves and oregano (1 teaspoon per rabbit). Bring to a boil, then simmer for an hour.

Heat a skillet over medium-high heat, drop in about a teaspoon of olive oil, and get a good sear on your rabbit (legs, loin): about 3 minutes/side. After your broth has been going about 30 minutes, put your potatoes, carrots and onions and a bit more oregano (1/4 teaspoon or so per 2 people), on to boil (about 1 cup water/2 people), then simmer over medium-low heat (for a thicker stew, start the potatoes at the same time you start your broth so more starch gets released, then bring to a boil mid-way and add the carrots and onions.)

Finally, join it all together (broth (minus the carcass), rabbit, veggies, parsley), and let that go for about 15 minutes. Salt and pepper to taste and enjoy with some soda biscuits (or as my friends call them, “hard tack”).