First off, an important lesson in Vietnamese: it’s pronounced fuuh…as in the sound you make just before “ck” when you realize you left your passport on your dresser. Or so says a friend of Vietnamese descent. At least according to Wikipedia (and they certainly wouldn’t print it if it weren’t true), it’s a bastardization of “pot au feu,” a French beef stew. If you don’t speak French, “feu,” is basically pronounced “fuh.”

So there you go. Now we’re all a little smarter.

But only a little.

Anyhoo, I found a nifty little pho recipe on the internets, but it was written in a lifehack style (so kind of hard to decipher), and there were a few things that needed changing. But, hey…how hard could it be to make a beef broth? Turns out it’s not too hard, but it does take about 10 hours out of your life. So since I’m the poster child for ADD, or so says my wife, I also made a lychee sorbet.

Roast the marrow bones at 375 for about 1 1/2 hours.  Drain the fat from the roasting pan (leave just a little), and put them in a large stock pot with the fish sauce and about 8-10 quarts of water.  Put the ginger, garlic & onion (aromatics) in the roasting pan and roast for about 20 minutes, until well-caramelized.

Make a sachet out of the spices.  Put it and your aromatics in the water. Bring to a boil, then back off to a simmer.

Somewhere around 2 hours, taste the broth…remember that taste, and you’ll understand why this cooks so long. Keep cooking for 8 hours.

With about 1 hour to go, put your meat in the broth & bring back to a boil (then simmer again).   Cook to an internal temperature of about 130 (cooking time will vary with cut & thickness).

Strain the broth (you don’t want to eat anything that’s left, although you might give the bones to your dog), and put the meat in a separate platter.  If you’re not going to eat it today, store separately.  (Eating it the next day is nice, because any fat has solidified on top of your broth.) Otherwise, get some water boiling and cook some rice noodles. Skim any fat from your broth.

While those cook, shave the meat and prep your eating garnishes.  Typically, you’ll put 1-2 ounces of meat in a bowl, plunk down a few noodles (1/2 cup or so), add a cup of broth, and garnish to taste. 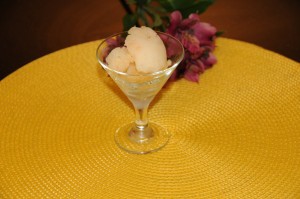 Make a simple syrup, and reduce by about 1/4 with the water and sugar. Drain the syrup off the lychees and puree.  Let the water cool, add the lychees, and put in an ice cream maker for about 30-45 minutes.

Add a little vodka to each glass of sorbet for a lychee martini! (If you do this, you’ll want to reserve a few lychees to put in the glasses as you would olives.)