I had a professor tell me “don’t serve me any meat without a sauce.” In general, not a bad mandate.

Let’s face it: a good sauce brings out the flavors of your meat. Unless you’re trying to watch the old calorie intake.

In that case, a sauce can be just deadly.  Do you have any idea how much butter goes into a hollandaise sauce?  You really don’t want to know…

But it is possible to make a really good sauce that, while perhaps not healthy in large quantities, is still diet friendly. With that in mind, I present 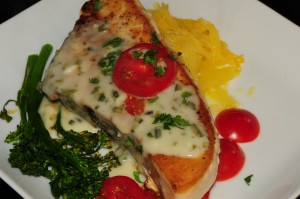 What To Do with It:

Take your fish out of the refrigerator so it starts to come up to room temperature about 30-45 minutes before you begin cooking.

Roast the poblano pepper over a flame (just put it directly on your gas stove), or in a skillet (flame works best).  Once the skin in charred, dunk it in ice water.  Cut off the bottom & top, and slice down one edge so that the pepper lies flat.  Scrape off the skin with a knife.  Cut one half of that into a brunoise (about one step above a mince).  Save the rest for another day.

Make a roux with the flour and butter.  You’re making a white roux, so don’t go very long.  Add the milk, and whisk over medium-high heat until it thickens.  Add the water, yogurt, pepper, half your cilantro and salt, and cook over low heat for about 20-30 minutes, or until the starchiness gets cooked out.  Stir occasionally and skim off any excess starchy film. (You may need to add a little more water if your sauce gets too thick.) As soon as you put your sauce on low heat, season your fish on one side with  salt and pepper.

After about 15 minutes, heat a skillet over medium-high heat.  Once it gets hot, add about 1 tbsp. grape seed oil (or canola–not olive, as it has too low of a smoke point).

Put your fish in, seasoned side down, and let it go about 5 minutes, then flip for about another 5 (you want an internal temperature of about 145 when you’re done cooking).

Plate the fish (I served it with aspiration and spaghetti squash), and sprinkle with fresh cilantro.

By the way, that sauce makes 8 servings of about 50 calories each.