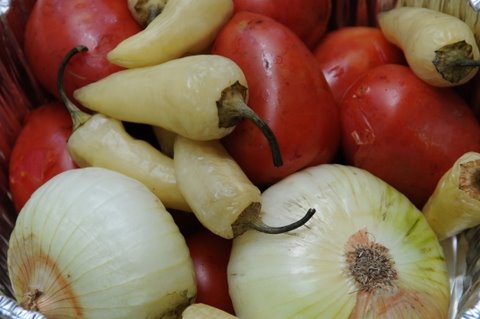 I’m going to let you in on a little secret: hungarian wax peppers and banana peppers look very similar.

Another fact with which you may not be familiar: the hungarian wax pepper has about the same scoville scale rating as a jalapeno, whereas the banana pepper is more akin to a pimento. If you confuse the two, you’re in for a surprise.

Fortunately, the folks had also bought a bag of roma tomatoes. Best of all, my dad has a cage for the rotisserie for roasting veggies. So we had something to do with the peppers.

Roast the peppers and tomatoes. If you’re lucky enough to have a cage, do them over coals or a flame. Otherwise, use a cast iron skillet. Roast them until the skin is blackened in places (not necessarily all over).

Cut off the stems of the peppers and the stem end of the tomatoes, then drop them in a food processor or blender, skins, seeds and all. Quarter the onion, and add as well, along with the lime juice. Smash your garlic cloves under a knife and mince. Add that and the cilantro, then blend. Now start adding the cumin and salt (this is a “to taste” kind of thing).

If you find the salsa too mild, you can always chop up another serrano and blend it in. Too hot? I haven’t the slightest idea (my salsa has 4-5 peppers), but I suppose adding another tomato might take some of the bite out.