Another year, another LakeFest. This year, I was tasked with coming up with a drink that would not be co-opted by anybody (last year’s blue water margaritas got a different moniker when the crew of Blue Flash showed up).

After about an hour of careful research, we came up with what we initially called a “Shooting Star.” After a happy accident, however, we settled on calling it a “Green Flash” (which, incidentally, is an atmospheric phenomenon, and should not be confused with that pesky blue flash that occurs in critical nuclear accidents).

Given the inherent … uncertainty … that can go along with this type of experimentation, and being the quasi-professional drunkard that I am, I diligently subjected both myself and others to several trial runs before pronouncing it LakeFest-ready, although I must confess that one member of our crew did ask me when the alcohol would be added. 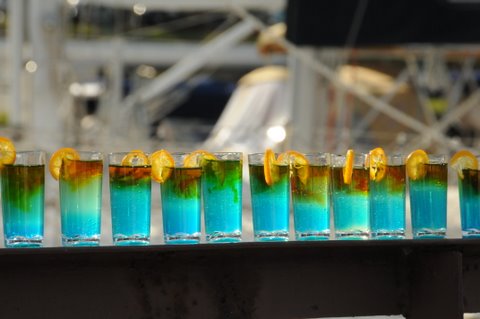 Now, take a toothpick and pierce the meniscus, and drop in one drop of yellow food coloring. Take a thin slice of kumquat and garnish.

The longer these sit, the more the food coloring will drop down into the cloudy layer of limoncello and club soda, and the blue curacao will mix from the bottom, to try to make them a la minute.

When you’re ready to drink, give it a quick swirl with a toothpick or straw to transform it from something resembling a sunset into an electric green concoction…just like what happens with a real green flash!

1 thought on “All My Drinking Friends Have a Sailing Problem, Part Deux: Green Flash”