So, I’ve officially met middle age.  I am now no longer allowed to have unlimited double cheeseburgers.

Now I have to cut down on my fat intake.

Hand me a gun.  I just want to get it over with.

Well, they say that necessity is the mother of invention. And I necessarily need something smoky in a lot of my food.  Bacon, apparently, is right out.  That means smoky goodness is right out.  Unless you want to have chipotles or smoked salt.

Chipotles are good (mine are awesome), but don’t always go with what you’re making.  Smoked salt runs about $30+/pound, which I am just too cheap to buy.

But what if you could buy your salt at about $9.00 a pound…or less?

I made a trip to World Market, bought some grey sea salt for about $8, and after my annual chipotle smoke, had almost a pound of smoked salt.

Salt (coarse grind)
Smoke (about 30 hours worth)
Aluminum trays with small holes in the bottom
Seasonings?

What To Do With It:

I did this while smoking jalapenos. For fun, I added (i) a sliced jalapeno to one pan, (ii) a whole jalapeno to a second and (iii) a sprig of fresh rosemary to a third.

First, poke small holes in the bottoms of your pans. If you’ve got coarse salt, you shouldn’t have any (or much) falling through.

Next, add whatever herbs/spices you think might taste good.  I found that I could taste just a bit of extra heat from the sliced jalapeno tray.  The rosemary added just a hint of the spice when ground with the salt. 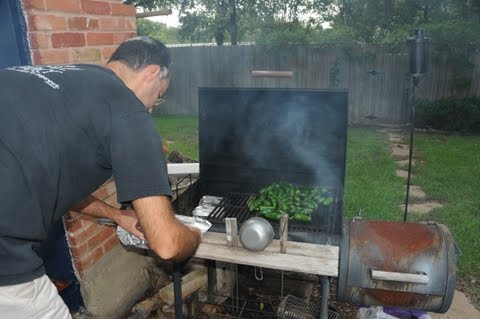 Place your trays according to the heat you’re using: 150 degrees and less, place on the top rack.  More, place on the bottom rack. You don’t want too much heat, as the resin will cook away. After my initial heating, I dropped my temp to about 125, and moved the trays up to the top rack, by the chimney (away from the fire box).

Don’t do this if you’re smoking ribs, for instance, as your salt will pick up the flavors of whatever moisture is floating around.  Jalapenos add a small amount of flavor, and so are great for this.

Smoke your salt, uncovered, for about 24-36 hours, stirring about every 4 hours. Put it in a grinder and use in place of bacon for flavoring (such as in potato-leek soup).