My family is from the south, and my folks grew up in the post-depression era. Maybe that’s why they always have a full pantry and freezer. Whatever the reason, I inherited that habit, and if I find a good deal at the store, I can’t resist it.

Which is how we came to have 14 pounds of pork loin chops in our freezer (who can resist “buy one ‘family size’ package, get two free”?). Now, pork loin chops for about a dollar per pound is a great deal. 14 pounds of chops in the freezer, however, presents a challenge. After all, there’s only so many different ways to cook pork chops, and then it starts to get boring.

So, we’ve been experimenting. Our latest foray was to try to make spring rolls. Took about 20 minutes start to finish.

Prep everything before you start cooking. The actual cooking time is around 6-8 minutes. 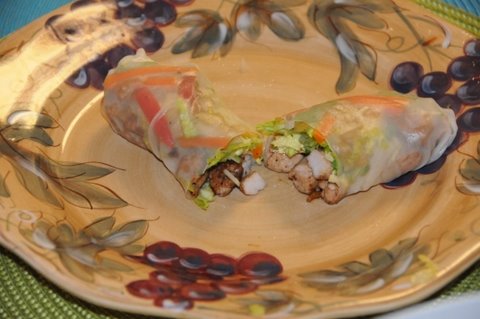 In a skillet about 10 inch round, place 1/4 inch water and heat until warm. Leave on stove.

Cover the pork with the spices.

In a separate skillet, combine the olive oil and sesame oil with the garlic and heat over medium-high heat until the garlic begins to turn brown. Remove the garlic and add the pork. Saute for about 2 minutes, then add the onions , ginger and peppers. Saute for another 4-6 minutes.

While the pork is cooking, in another pan combine the oil and soy sauce over medium heat. Drop in the hard vegetables for about three minutes (you want them still quite firm). Remove and drop in the cabbage for a minute, moving constantly (you want it only slightly wilted).

Now the fun begins. Place a spring roll wrapper in the water. The instructions on my box say to leave it in about 3 seconds. I found 5-8 worked better. Either way, don’t leave it in until it’s “done,” because then it will just shred on your plate. It should still be firm when you pull it from the water (it will get more pliable).

Put the wrapper on a plate and dish out some veggies (raw and cooked) and meat. Roll it like you would a tortilla, but close both ends. So, if your food cuts across the diameter of the wrapper like this: (—–), you’re going to fold the ends over thusly: )—( and then roll.

Mix up some Sriracha and soy sauce, or Chinese mustard and teriyaki, or peanut sauce, or whatever floats your boat for dipping. Consider adding mushrooms to the cooked vegetables and lemon grass to the raw vegetables and substituting watercress or bean sprouts for the pea shoots. You could also make this with chicken (maybe cook a minute longer) or shrimp (cook a couple minutes less).