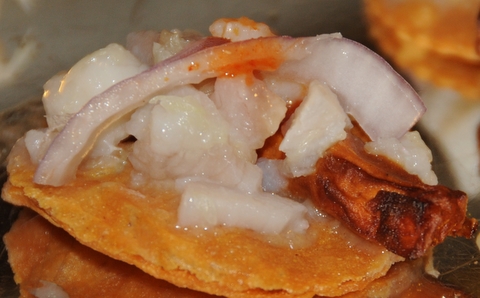 In the world of computers, a killer app is something “of such great value or popularity that it assures the success of the technology with which it is associated.”

In the world of dinner, a killer app sets the tone for the meal to come, and assures the success of the dinner with which it is associated.  Start off your meal with bagel bites, and I don’t care how well-prepared or tasty  the rest of your meal is, it will fall flat.

We recently had a few friends (and by “few” I mean “18”) to dinner.  Seeing as our kitchen is in a state of disrepair (but the cabinets are finally in place), we had to use my folks’ kitchen.  Cooking in someone else’s kitchen is never easy, so we went for the simplest killer appetizers we could think of: bruschetta and ceviche tostada.  We also served stuffed portabellas that night (along with stilton-stuffed pork chops), but as an entree.  While I appreciate the need for some people to eschew meat, I just don’t get it.  So I’m posting the mushroom recipe here.

6 portabella mushrooms (or alternatively, you could use about 18-20 of the “baby portabellas” aka crimini mushrooms

1/3 lb roquefort
1/3 cup walnuts, chopped
1/2 cup breadcrumbs (I made my own, but you can use store-bought if you have enough on your plate already)

(Bruschetta)
Slice your baguette into 1/4-1/2 inch wide slices. Using a pastry brush, brush each side with olive oil. Bake at 350 for 5-8 minutes per side.  You can add a little parmesean after you flip them, if you want.
Add the olives, cheese, 2 tbsp olive oil, garlic, eggplant and onions together.  Stick in a food processor and blend.  Nuke this (or heat over medium-low heat) until it’s heated throughout.  Now you have an olive tapanade.

Put your tomatoes, oregano, salt and about 1/4 cup olive oil in a bowl, mix and let sit for an hour.

Place the onions in salt water and set aside for about 3 hours.

Cover the tilapia with lime juice in a bowl. Stir occasionally (this will take about 3 hours to cook).

Using a cookie cutter, cut your tortillas into 1-1/2″ to 2″ rounds.  Drop these in hot oil until brown. Remove and drain.

Drop your sweet potato fries in the oil for about 3 minutes–you’re just blanching them, not frying.  For both, you’ll have to do multiple batches.

Place a slice of potato on a tortilla round, cover with about 1 tbsp of fish, put an onion slice on top (alternatively, mince your onions, and sprinkle minced onion on top), and add a little hot sauce on top.

Wash, then dry your mushrooms. Lightly brush the outsides with olive oil. Cut out the stems.
Mix together the roquefort and walnuts.  Place that mixture in the center of your mushroom, leaving about 1/2 inch rim (if using crimini, go ahead a
nd fill). Sprinkle a little salt around the edges, spinkle some shallots (enough to lightly cover your cheese) and cover the whole mushroom with bread crumbs.
Bake at 350 for 20-25 minutes.