I have been wanting to cook octopus for some time, now.  But I’ve always been afraid of it. If you can pick one food that you can screw up in less than 30 seconds, this is it.  Cook it 30 seconds too long, you’ve got seafood twizzlers.  Undercook it and…well…let’s not go there.

If you’ve ever seen the movie “What About Bob,” then you’ll understand the phrase: “Tiny steps. Get on the bus.” So rather than starting with a full-on octopus, I started small.

And, because I care about educating more than just the palate, a note about forbidden rice.  Supposedly, it got its name because it was reserved only for the emperor (or royalty) of China.

The only specific reference I could find attributed this term to an emperor from the 1700s. With about 2000 years of Chinese history, I’m skeptical. Clever modern-day marketing ploy?  True fact? 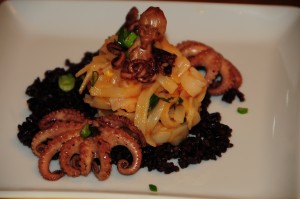 Unless they’re really small, cut the heads off the octopus.  Drop into boiling water for two minutes, then chill.

Place in a bowl with the soy sauce, juice from the limes and enough additional water to cover the octopus.  Refrigerate 3-4 hours.

Start cooking the rice.  Then start the noodles in the octopus marinade (remove the octopus first!).  Heat a skillet over medium-high heat with a high-smoke point oil.  Sautee the octopus 2 minutes.

Plate by setting down a bed of rice, then put the noodles on top (use a deep cookie cutter to get them to hold their shape a little better), and put the octopus on top.  Top with chopped scallions.