A few years ago, we had some dear friends that lived across the street from us.  We had the kind of friendship where we didn’t wait for an invitation.  On any given night, one or the other of us would see if someone were home across the street, grab a bottle of wine (or three), and march on over (and stumble back a few hours later).

Then they moved and ripped our hearts out.

But I’ve gotten over that.

Another good thing about Claude and Aurora was that they could cook, and liked to eat good food.  On one of our impromptu soirees, Claude disappeared into the kitchen and reappeared with fabulous chicken nachos.  Problem was, he couldn’t recall the next day how he had made them. He made a couple half-hearted attempts at replicating them, but never achieved the level of greatness (although, I must note, he never again tried to replicate them three bottles of wine into the evening).

After a few failed attempts myself, I think that I may have come pretty close to replicating the original.  In homage to our friends, I present you 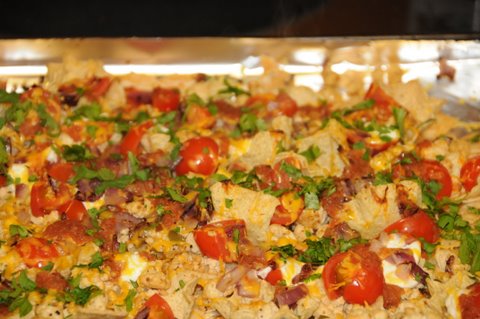 Put the rest of the oil in the same pan, and brown the chicken along with the serranos, garlic, salt, some pepper, and juice of 1 1/2 limes.

Place your chips on a baking sheet, then add your sour cream, chicken, salsa, tomatoes and onions.   Bake for 10 minutes.  When you take them out, sprinkle on the cilantro and the juice of the other half lime.