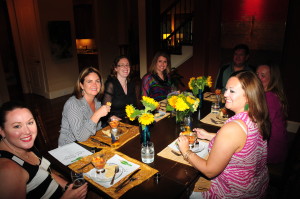 Beer can go with food other than hot dogs!  That particular revelation came from a woman who attended a recent beer tasting I did with Saint Arnold Brewery.  For anyone who isn’t familiar with Saint Arnold, they’re a craft brewer out of Houston. 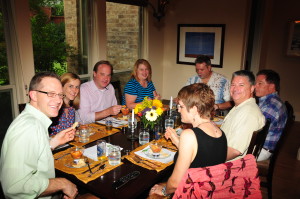 The challenge for me was to leave behind my preference for hopped-up, wreck-your-palate IPAs and go for beer that is not in my standard repertoire.  I also had to jump out of the traditional brew food box (think brats, burgers & potato skins) to pair some real gourmet fare with five beers.  The results:

Saint Arnold Divine.  Regrettably a limited-release beer, this Belgian-style beer, with its high ABV and low IBU (alcohol by volume and international bitterness units), was a great opener to the night.  We paired it with some dried fruit (blueberries and apricots), green apples, and cheese (English cheddar, stilton and a cranberry goat cheese).  The spice in the beer worked great with the concentrated tastes of the cheeses and fruits. 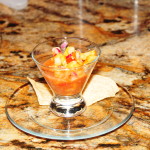 Saint Arnold Summer Pils.  One of seven seasonal offerings, this easy-drinking, slightly hoppy pilsner paired very well with Belizean-style ceviche.  It balanced quite nicely with the slightly spicy notes from the achiote and ginger in the ceviche. 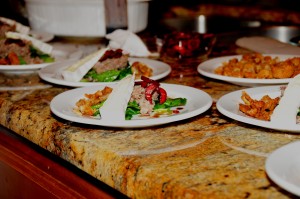 Saint Arnold Brown Ale. What do you pair with a fairly complex, chocolaty, sweet brown ale?  My choice was duck confit salad.  And how to make that? Spinach, lightly wilted in duck fat, with slightly-warmed ,shredded duck confit, balsamic vinegar, fresh cherries, a balsamic reduction and a slice of brie cheese.  Arguably one of the best pairings of the night (even if perhaps not one of the best pictures…).   It cut right through the fat, married with the tart, and gave one of those “just give me a quiet moment” experiences you usually associate with a great wine pairing.

Saint Arnold Amber Ale.  Hoppier than the Brown Ale, less than the Summer Pils, I paired this with salmon baked with sun dried tomatoes and fresh basil, topped with a very reduced garlic & white wine sauce (about one bottle of wine reduced down to about 1/3 cup).  We served it with pureed purple cauliflower and roasted broccolini.  The slightly bitter hoppiness cut through the fat of the salmon and balanced well with the sweetness of the reduction and tomatoes.

Saint Arnold Santo. OK, from a pure drinking standpoint, I’ll admit that this black kölsch, as Saint Arnold describes it, is not my favorite (don’t get me wrong, it’s good…but with an IBU of only 17, it’s just not my style).  Paired with lemon custard with raspberry whipped cream, and WOW.  If it didn’t supplant the duck confit/Brown Ale pairing as the best of the night, it certainly took the award for the most surprising.  A bite of the tart and sweet custard followed by a sip of Santo, and you suddenly had coffee with dessert. .

So, the next time you’re making dinner, jump out of your comfort zone, and try pairing beer with your food.  You’ll probably be more than pleasantly surprised!

3 thoughts on “Beer: It’s Not Just for Hot Dogs Any More”