This year for our anniversary we went to Driftwood.

Jenn is all about trying the new, hot restaurants in town.  Me?  I’m more of a “let’s go the the French Room because it tastes great” kind of guy. But Jenn had a half marathon the next day, so the French Room tasting menu was right out.  And we like seafood, so Driftwood seemed a great choice. Before I jump in, I should point out that I believe there are two restaurants worth going to in Dallas: French Room and Bijoux…sometimes Abacus. So, I’m a harsh critic.

Let’s start with the vibe. We were the most dressed up, and I was wearing linen pants.  So, I’d call it hip, bordering on hipster (all the waitstaff were in some sort of brown plaid shirt), but still cool and certainly relaxed.  The decor is crisp and clean. But the noise… Maybe the idea is to turn tables, maybe someone didn’t think through acoustics.  But if you can’t sit outside, don’t go (unless you like shouting at your dining partners).  Fortunately, we sat outside.

When it came to ordering wine, I wasn’t certain if our waiter was pushing a wine that the restaurant wanted to move, or if he was recommending a “solid” choice that would probably make people happy. Either way, the Morgadio Rias Baixas Albarino was just a little sharp, and had no lasting finish.  It probably would have been fine with our meal; just not what we were looking for.  We went with the 1er Cru Montmains, and we were quite happy, but I felt as if I had to guide the waiter to it a little.

What do you think of when you think “lobster roll?” If you answered “lobster on a roll,” you’d be spot on.  And, I might add, you’d be pretty tasty (at least if you were the roll).  Think cole slaw made out of lobster.

The tuna was good. Granted, I’ve got high standards, so my “good” is probably “great” for a lot of people.  But, oh, the clams.

Give me a moment.

Fennel sausage, calabrese peppers and marinated tomatoes in a buttery white wine broth. Too bad they didn’t have spoons.  Good for us that we were able to make spoons out of our shells and forks!

On to the entrees. 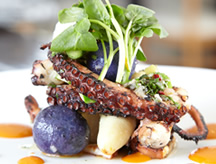 I had the chargrilled octopus (at the time of this post, a pic was linked at right), and Jenn had the salmon with a truffle and shiitake puree.

To accompany the entrees, we split brussels sprouts and pork belly in an asian-flair sauce.  They were good, but the sauce reminded me of the type of flavor you get in an all-you-can eat chinese buffet.

The smoked tomato vinaigrette on the octopus made it taste like a barbecued octopus.  Now, there’s nothing wrong, per se, with barbecued octopus, but (i) it was really not what I had in mind and (ii) it tasted about like Stubb’s sauce. While I understand that it’s hard to grill octopus without killing it, and that octopus lacks any great flavor…something a little different would have been a little better.

The salmon, unfortunately, was overcooked. Other than that, it’s hard to argue with anything involving truffle. So, I guess it’s a good thing there was truffle.

We finished up with a roasted pumpkin creme brulee. I don’t eat dessert.  I almost ordered a second. If you go, eat this.

In all, I’m glad we went.  Nothing was bad, and a few things were great.